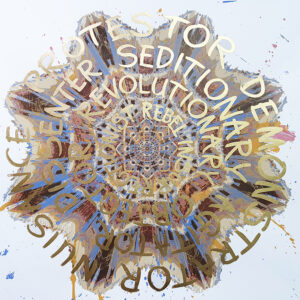 ‘Not in my Name’ is a 10 layer screenprint, created in 2016 in response to the Government rushing through a decision to bomb Syria following the Paris attacks. It is based on press photographs of a block of flats, which has had the whole front blown off in a bomb attack, revealing the evidence and remains of individual homes behind the rubble of the facade.

I found a few of these in a drawer and decided to revisit them by adding some signwritten text. The text explores the use of language, by the media and Government, to categorize and label people by ‘name calling’ …. the names used infer nuisance, trouble-making and worse onto anyone who disagrees with the Governments policies.

This piece is a one-off and is called ‘Nuisance’

This print was originally called ‘Social Engineering’. The title reflects my research into the role played by our Government in the deliberate ‘reorganisation’ of the Middle East and African regions. The print is based on photographs, taken by drones, of further destruction. Again, the signs of peoples former lives are visible in the rubble of what remains of their towns and cities.

This particular version was printed onto a piece of old fashioned, textured wallpaper to suggest the interior of people’s homes, which suddenly become visible to the world when the buildings they live are bombed.

This print is a one-off and is called ‘Objector’

Both of these pieces will be exhibited for the first time at LOOP2022 at Bankside Gallery, opening on 13th September.